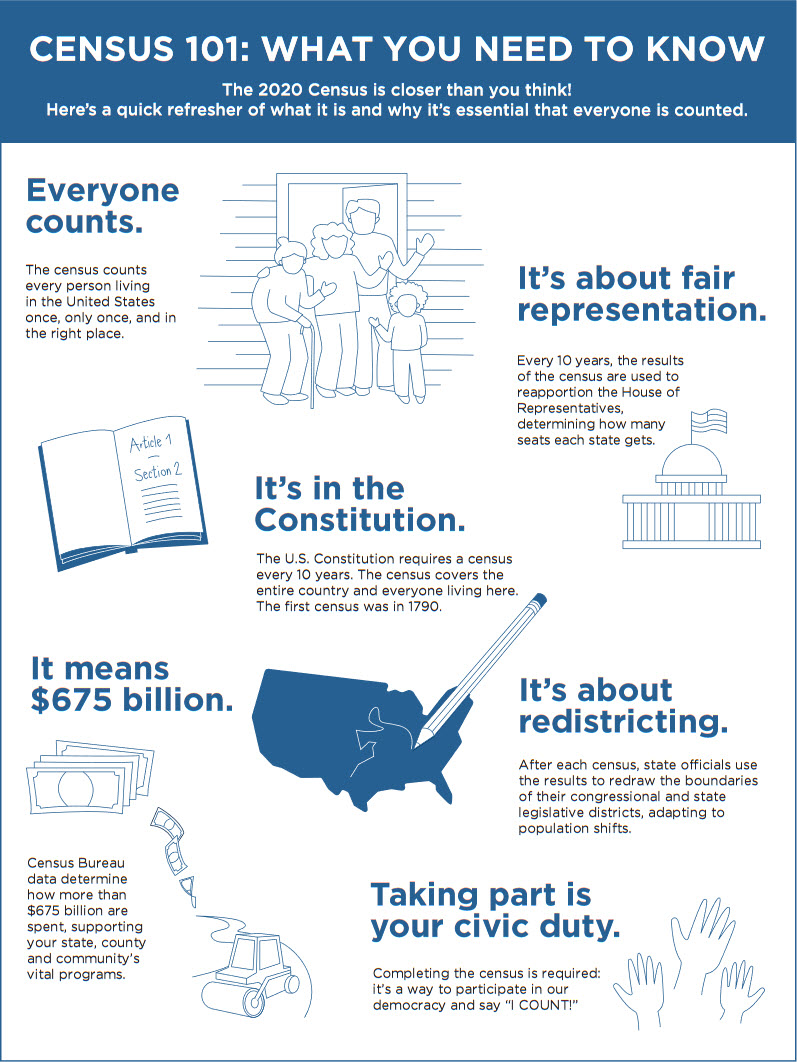 The United States Constitution requires a count every 10 years of every person who is residing in the U.S., regardless of immigration status or citizenship. The Census Bureau's goal for the 2020 Census is to "count everyone once, only once, and in the right place." Here are the basic steps in the process:

The Census Bureau maintains a list of every housing unit in the United States. A housing unit is a house, apartment, condominium, trailer, or other place where people might live. The Census bureau started updating its list for the 2020 Census in 2015, adding new houses and apartment buildings that have been built and removing houses and apartment buildings that were demolished or converted to non-residential uses since the 2010 Census.

Beginning March 12, 2020, the Census Bureau will mail census materials to 95% of homes. (To understand how the other 5% of households are counted, see the section about rural and remote areas.) Eighty percent (80%) of those homes will receive a letter inviting them to respond to the census online using a unique code. The other 20% (where internet access may be limited) will receive the same letter plus a paper questionnaire. All households also will receive information about how to answer the census by telephone. April 1 is Census Day, although most households will receive their materials before then and may respond prior to that date.

Respondents will submit one census form listing everyone who lives in their household. Respondents may complete the questionnaire for their household online, by using a paper questionnaire, or by phone (by calling Census Questionnaire Assistance, which will be available from mid-January to early September 2020). Some households without traditional mailing addresses will be counted by Census Bureau employees in person.

Households will receive several reminder letters from the Census Bureau if they do not self-respond. The final mailed reminder will include a paper questionnaire. If a household does not complete the questionnaire after receiving mailed reminders, beginning in May 2020 they may receive a phone call or an in-person visit from a Census Bureau employee. Households can continue to self-respond online, using a paper questionnaire, or by phone during the follow up period.

The Census Bureau will release population totals and other publicly-available data beginning in early 2021.

Did you know you can make money while helping to ensure a complete count? The U.S. Census Bureau is recruiting thousands of people across the country to assist folks to complete 2020 Census. Visit the Census Bureau website for openings in Tennessee.

The enumeration starts in remote Alaska on January 21, 2020, but most households will receive their census materials by U.S. mail or hand-delivery starting in mid-March. The online and telephone response options will be available starting on March 12, 2020.

How long does it take to fill out the form?

The Census Bureau estimates that it will take about 10 minutes to complete the census questionnaire, depending on the number of people in the household.

Can I take it online?

Yes! 2020 marks the first year the Census will be available online. It will be optimized to allow people to respond on a smartphone, tablet, or computer. Learn about the technology and cybersecurity here.

Do people have to respond online?

No, households have the option to respond to the census questionnaire in one of three ways: online, by telephone, or using a paper questionnaire.

In what languages will the online form be available?

In what language will the paper form be available?

Will there be assistance for other languages?

Census Questionnaire Assistance via the telephone will be available in English and the same 12 non-English languages referenced above, with Mandarin and Cantonese. People will also be able to use their Telecommunications Device for the Deaf (TDD) when calling. Additionally, the Census Bureau will provide language guides in 59 non-English languages. See below.

In what ways will responding to the census be accessible?

Language guides will be available in American Sign Language, Braille, and large print. Census Questionnaire Assistance will also be available to callers using a Telecommunications Device for the Deaf (TDD).

Can people respond on a smartphone or a tablet?

Yes, the online form will be optimized to allow people to respond on a smartphone or tablet.

Can people respond if they have misplaced or never received the unique ID mailed or hand-delivered to their address?

Yes, people can respond online or by telephone using an option called Non-ID Response, which allows them to complete their census forms without the unique ID, as long as they provide a valid home address.

Is the online system secure?

Yes, the Census Bureau has taken significant steps to protect online responses. All information entered online is encrypted as soon as the respondent hits "submit".

Will there be a problem if multiple people respond online from the same location or IP address?

The Census Bureau will only restrict IP addresses as a security precaution. For example, they may block an IP address if its activity appears to pose a security threat. They are anticipating and planning for multiple responses from computers in places like libraries, or generated through other outreach activities, such as block parties.

Can census responses be shared with law enforcement or other government agencies?

What should people do if they have a question or problem?

People can call Census Questionnaire Assistance toll-free for answers to questions or to provide their household responses by phone. The phone number will be available in early 2020.

What happens if a person misses a question?

The Census Bureau strongly encourages respondents to answer every question for every person in the household, but will allow submission of incomplete questionnaires. Bureau staff may follow up on incomplete submissions.

How do I identify an official census worker in person or over the phone?

Census workers must present an ID badge that includes their photo, the U.S. Department of Commerce watermark, and an expiration date. For more information, see these additional tips from the Census Bureau for identifying census workers. To verify, people can also contact Census Questionnaire Assistance, enter the name into the Census Bureau Staff Search, or contact the Regional Office for their state.

Information contained in this subject guide was adapted from the American Library Association publication Libraries' Guide to the 2020 Census, and 2020census.gov.